When I was younger I had my life and family mapped out.  I would meet and marry the man of my dreams, and fall pregnant with ease.  Following a textbook birth, we would breeze through a divine few months of new-baby heaven.  A perfect toddler and child, my little angel was going to be ridiculously beautiful, with intelligence off-the-scale, achieving highly in sport, joyful around adults and popular with peers.

The reality was far from the ideal.  After one failed marriage I finally met the man that was put on this Earth just for me.  After many torturous months, we finally fell pregnant, and I started to ponder excitedly over our future child.  I still believed he or she would be remarkably fantastic, but I allowed myself to become a little more realistic.

I conceded that it didn’t matter if they were not the very most gorgeous-looking child, the top of the class, or the best county athlete.  I acknowledged that child birth was going to be painful, and that motherhood would be draining, all-consuming and emotional.  However, my optimism remained intact and my concerns were really just my brain’s way of contingency planning against the worst-case-scenario: a scenario that simply would not happen to us.

When I was due to give birth, I remember the age-old phrase of ‘as long as they are healthy’ making a few appearances, but this was lip service rather than a consideration for the reality of what it meant.

Following Jenson’s birth, all of the above was wiped out.

After a flurry of panic, machinery and swift moving doctors, my bundle of blue and grey bones was placed in my arms.  He gazed up at me and my life was complete.  I had my movie-moment: I cried, my husband cried, the baby cried.  It was a cacophony of delightful bliss and mounting anxiety.

His life was never in danger, but he was swiftly surrounded by a gaggle of specialists.  The first, most noticeable thing was his birth mark; a deep purple blemish from his foot to his buttock.  Then the distorted positioning to his left foot, followed by his unnaturally clenched fingers.  His right eye was larger than his left and his face was definitely asymmetrical.  Feeding problems ensued. The list of medical concerns grew as the hours and days went on.

For the first few months, we lived in a haze of new baby fever where our new little darling was our entire world.  This was no different to any other new parents’ experience, except it was rudely interjected by many inconvenient hospital appointments.  These were just a minor disruption to our otherwise perfect family life.  We had some traumatic times, in particular with feeding problems, but in a world where everything was new to us, we had no idea how far from the ‘normal’ new-born arena we were.

Amazingly we continued in this manner up until Jenson’s diagnosis, at 13 months.  Looking back now, it seems incredible that we didn’t recognise or give credence to any consideration for something more onerous.  I look back and see how naïve we must have seemed to those on the outside. 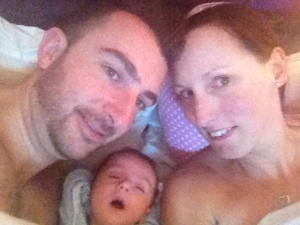 My husband and I were existing in a bubble of perfection: Jenson had his little problems that we considered to be simply a transient phase that we needed to endure.  I don’t remember us having any conversation in the context of ‘what if’; we genuinely believed every little problem Jenson had was a compartmentalised issue that would resolve itself, and that each was mutually exclusive.

We continued to address his problems with the attitude that they were finite and fixable, and no one, not even health professionals, suggested that we should prepare ourselves for an alternative scenario.

I see now that the journey through the first 13 months of a pre-diagnosed Jenson was a gentle gradient into the world that we now live.  It was a kind and temperate exposure to the truths and tears that we would become accustomed to.  The world in which we now live is so far removed from the ordinary world that we could not have survived unharmed without that gentle acclimatising journey.

Our reality now is a world of special needs, we know no different, and even if we did, we would not change it.  Special times with a very special child, where we have learned to cherish every minute in spite of, and because of, his special genes.