Too often we read articles about the lows of special needs parenting. The sadness, envy, guilt, anger, despair, frustration, anxiety: it reads like a list of 7 deadly sins.

It’s entirely understandable to have these feelings: we all do, and I agree that it makes us all feel comforted to know we are not alone in having these feelings.  We even share and re-post these articles on social media in a vain attempt that the rest of the world might have an insight into our lives!

However, I believe it is really important to recognise and celebrate the incredible highs that we experience too. I also think it’s crucial that those people close to us are aware that we have these feelings, and that actually, life IS good.

Before entering the world of special needs I would have looked upon a family such as mine with pity and sympathy, and I would have felt relieved that it wasn’t me that had been dealt that hand.

By sharing our positive experiences and emotions, the people around us are all the better for knowing that we don’t need their sympathy.  That in fact, we experience feelings that they do not, cannot and will not experience. And actually, it is them that, at times, should feel envious of us. And this is why: 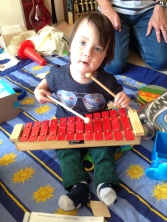 When your child achieves something that six months ago you could not have dreamed they could achieve, that feeling of exhilaration is amazing. It is often the most minor of things, but to you it represents so very much. There is a definite incremental shift in our capacity for experiencing excitement from everyday life.  I suppose it’s simply an enhanced appreciation of the joys of life resulting from the awareness that nothing can be taken for granted.

The absolute jubilation I experienced the very first time Jenson demonstrated the coordination to bash a xylophone with a beater would challenge the ecstasy experienced by a lottery winner.

I am so proud of Jenson and I frequently show him off.  True, the feats that I am demonstrating to others would be easily overshadowed by Jenson’s peers. However, as parents of special needs children we have carte blanche to show our children off when they achieve the most innocuous of things.  This is an extra special bonus that came with having our children. 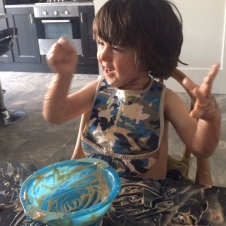 At two and a half, while Jenson’s friends are learning the third verse of ‘Mary had a little lamb’, I am proudly displaying his new skill of clapping his hands.

A new-found appreciation of the little things in life, such as relaxing in a café with a cup of tea, having an uninterrupted night’s sleep, or going on a family picnic that is idyllic rather than bumbling chaos.  Also of course, the appreciation for the wonderful people in our live without whom we could not function. 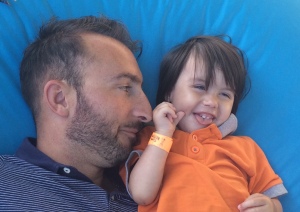 It’s 6:30am and I have been up for one hour.  I’m wearing yesterday’s underwear and bags under my eyes. The to-do list is longer than my arm and we have run out of Jenson’s prescription.  Matt is running around stressed because he’s late for work.  I would pay quite a sizeable amount of money right now to crawl back under my duvet.

Lo and behold, just when I start wondering how I’m going to get through the day, Jensen lets out a chuckle that would bring a smile to the most miserable of folk.  I’m not sure what he’s laughing at, and I don’t think he really knows either. Perhaps the animal noises coming from his toy.

Matt and I laugh in response.  Impossible not to, it’s contagious. He laughs at us laughing, seeing the response he has caused, and feeling proud of himself, he ramps it up a notch. We laugh louder.  He chuckles harder. The avalanche effect is born. We are fixed. Today is not going to be so bad after all.

We are in awe of our children.  The things that they have to endure on a daily basis astonish us.  Just when we are at tipping point, they pull another one out of the bag. Their ability to absorb so much that life throws at them, whether it be physical pain, or dealing with everyday life that conflicts with their sometimes irrational requirements.  We are in wonder of their resilience.

I was dreading taking Jenson for his echo-cardiogram on his heart.  He is severely sensitive to being touched and prodded, especially by strangers.  I had been fretting over this for days, thinking over the possible ways to appease him and keep him still throughout the 20 minute ordeal, and avoid sedation.  After some minor wriggling, and getting used to the cold jelly and strange probe, Jenson lay back in my arms and listened to a story.  There he stayed for the whole 20 minutes, as if he subconsciously knew it was for his own good and was overriding his instincts to fight and resist.  I could physically feel his fear.  I walked away from the hospital that day in awe and wonder.

Through our journeys we are exposed to a realm of children with a range of different issues.  We frequently experience feelings of humility towards families that have a terribly tough time and are astounded by the resilience they show.  Equally, we are often in a position where we rely on others more than we would like; whether this is friends, family or health professionals.  We are so very grateful for the extra mile that they will go, to make our day better.  A glass of wine with a friend when it’s been a tough day, even when she was due at work an hour ago, an extra half an hour therapy when the physio’s shift is over, or a box of goodies in the post from a loved-one, ‘just because’.

Jenson took a while to settle into nursery.  He was out of his depth to some extent with all the other ‘ordinary’ toddlers running around rambunctiously.  Jenson’s key worker was aware of my protectiveness and concerns, and she would call me at the same time every day to update and reassure me.  Despite the other children in her care, she would hand him over at the end of the day with a verbal account of each and every thing he had achieved, every ounce he had drank, who he had played with, what he liked and didn’t like.  I felt so humble and grateful that she reached out and recognised my trepidation; she made those two days a week so much more bearable.

Our children have a role in our families that could not be replaced.  They provide us with a feeling of solidarity.  We go out of the house as a family, even when it would be so much easier to stay indoors, hiding from the world.  On days when things are tough, we would rather be together facing the elements, than alone, functioning separately.

On weekends, my husband loves to take Jenson to the supermarket.  This is a chore that I avoid due to my irrational fear of attracting negative attention in a situation where I cannot escape.  Matt, on the other hand, would rather be together, with his boy, and face those challenges.  His positive attitude translates into a positive experience, and they inevitably have a blast! I love seeing their faces when they arrive home with naughty looks on their faces as if they’ve been up to mischief.